B&T Shiloh Shepherds and P&C’s Ridgewood Shiloh Shepherds have combined to become “Ridgewood Shiloh Shepherds”.  Christi Yonavick and her daughter Trish Beltz work very closely together.  Living fifteen minutes apart allows them to easily assist each other in the care of their dogs.   We are a private breeder and all dogs live inside with us as part of our family.  We do have a Pennsylvania Kennel license (#01292 Class–K1) and we are visited twice a year and we pass all of the new 2009 regulations put into place.

In both homes, all dogs live indoors with us as part of the family.  We have NO KENNEL runs. We have approximately 1-3 litters of puppies a year, and these puppies are born and raised at Christi’s home.  We breed for temperament and health per our registry rules.   All of our Shiloh’s are of Champion bloodlines, DNA tested for parentage, Penn Hip or OFA hip x-rayed, and CGC with gunfire.  We also test our potential breeding candidates for heart, elbow, thyroid, TLI , eye certification and DM (Degenerative Myelopathy) testing.   All test results can be seen on this website and copies are sent to potential customers in their Puppy Information Packets.

We can be seen showing our dogs at ICKC (known in the past as Rarities) rare breed events.  We are also involved in Therapy work with some of our Shiloh Shepherds. 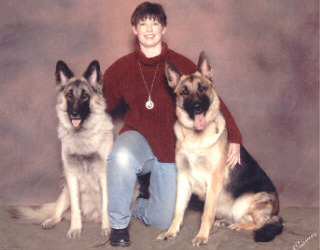 Christi is a Registered Nurse and these days is retired.  She became involved with Shiloh Shepherds in 1998 when she purchased her first Shiloh Shepherd “Chewbacca”.  Christi quickly became very involved with showing Chewie and within the first year and a half had become the proud owner of Chewie, Jackson and Chyna.  Shiloh Shepherds are like potato chips–you can’t have just one!

Over the years, Christi has been continuously learning about the Shiloh breed and had her first litter of puppies in  2001.  She handles her own dogs in the conformation show ring, along with helping to show Ridgewood Shiloh progeny.  You will find her showing her own dogs or helping others out with showing or assisting them in learning to show their own dogs.

Christi is married and occasionally you will see Peter at a show.  Peter is retired.  Pete usually will stay home to take care of the Ridgewood fur babies while Christi and Trish are off at a show.

Christi and Peter live on 2.5 totally fenced acres of land near Reading, PA.  All the dogs live inside as family members and there are NO KENNELS or KENNEL RUNS. 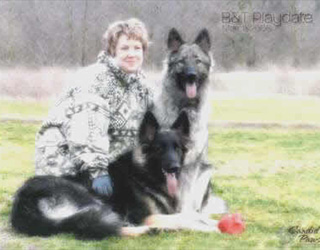 Trish started to handle Kota in the show ring and quickly caught the “show bug”.   Occasionally, you will even see Brennan handling a Shiloh or two.

BT Shiloh’s originally started with Stud Dogs only, but now has progressed to having females in their home.  Trish and Brennan decided to combine forces with P&C’s Ridgewood Shiloh Shepherds to enable Ridgewood  to add to their breeding program.  Since Trish and Christi travel to all of the shows and assist each other constantly with the dogs it was logical for them to join under one name.

Trish no longer handles dogs in the show ring, but is still very active in the Shiloh Shepherd breed.  Currently, Trish is Past-President of the International Shiloh Shepherd Dog Club (ISSDC), Show Chairperson of the TSSR (since 2005)and a TSSR Director, assists with stewarding at dog shows and occasionally judges.   You will always see Trish assisting in some way at a dog show or other Shiloh Shepherd function.

Trish and Brennan live with their Shiloh Shepherds on 2 acres (1 acre is fenced in for the dogs).  All of the B&T Shilohs are family members living inside the home also.

...they're here to stay. You don't like pets, be on your way. They share my home, my food, my space. This is their home, this is their place.

You will find dog hair on the floor, they will alert You're at the door. They may request a little pat, a simple "no" will settle that.

It gripes me when I hear you say "Just how is it you live this way? They smell, they shed, they're in the way" WHO ASKED YOU? is all that I can say.

They love me more than anyone, my voice is like the rising sun. They merely have to hear me say "C'mon, time to go and play".

Then tails wag and faces grin, they bounce and hop and make a din. They never say "no time for you," they're always there, to GO and DO.

And if I'm sad? They're by my side, and if I'm mad, they circle wide, and if I laugh, they laugh with me, they understand, they always see.

My dogs live here, they're here to stay. You don't like pets, be on your way. They share my home, my food, my space. THIS IS THEIR HOME, THIS IS THEIR PLACE.